I greatly appreciate @DevenRue pointing out the pre-order for the Dungeons & Dragons Art and Arcana. When I looked this up on Amazon, there was no hesitation in pre-ordering. After opening the boxed set, I was amazed. Still am! From the description, I knew the boxed hardcopy had bonus materials, but I didn’t expect so much! 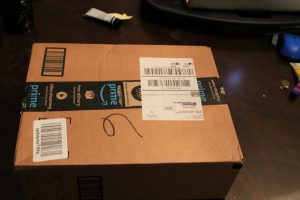 Over the years, I have found the artwork of D&D inspiring. I’ve collected back issues of Dragon magazine and Dungeon magazine because of the detailed fantasy art for years. I’ve been fortunate to get early copies at junk stores at bargain prices because the owners of the shops didn’t think they’d sell. The greatest attribute in this set, aside from the artwork, is learning more about the history of the game.

I remember in 7th grade, sitting in an empty classroom during break and watching one of my friends assume his role of Dungeon Master. This was back before computers, cellphones, and the printed game and character sheets. They used pencils and lined notebook paper to keep up with their gold and leveling. I didn’t know the rules, but I enjoyed watching their interactions. I had already written my first novel, so listening to each of these guys fight their way through a dungeon was entertaining. 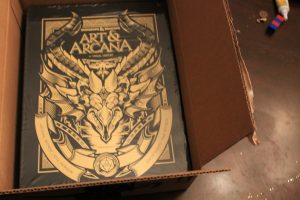 Not too long after this, in the early eighties, I remember the harsh attack on these games and gamers by various religious groups. A church I had attended at the time frowned upon such games for ‘using your imagination.’ I won’t get into the argument over this, but needless to say, those attacks were unfounded. Schools started banning the games … 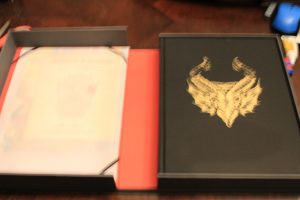 I marvel that in our rural area of Alabama that my friend had even learned of the game, as we had no major bookstores in our county. I imagine he had either discovered the game at the mall in Chattanooga or the one in Gadsden.

Seldom getting the opportunity to go to the Gadsden mall, I was thrilled when I finally visited the bookstore near my senior year of high school. I walked down an isle with dozens of Dragonlance and Greyhawk books, as well as other D&D books. The artwork floored me and stirred inside me a desire to write more books.

So I hope you enjoy the pics of me unveiling the package that we received yesterday. If you’ve not ordered yet, trust me, it’s worth the money and the memories.