The Deimos Virus was the most difficult novel I’ve written. From concept to finished product was a fourteen year timespan. The story required a lot of research on my part and with the Mars rovers and other exploration projects by NASA, ideas about the landscape constantly changed. In the news over the past decade, there’s talk about establishing a colony on Mars, which brings to mind so many possibilities for how civilization could be established. 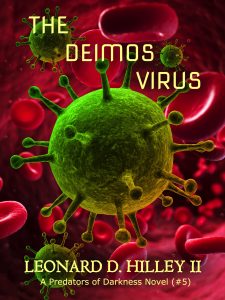 At times, I can imagine how different it’d be to view the stars at night from the red planet. Stargazing on Earth is polluted by the street lights of major cities and even suburban areas. To observe meteor showers is almost impossible unless we drive to a secluded area far from these lights.

Can you imagine nightfall on Mars? The darkness surrounds you while the bright stars fill the night sky. What about the quietness not disrupted by automobiles, trains, jets, and industries? A nightfall filled with peace and lack of pollution? One of the downsides is it’s a frozen terrain that lacks colorful scenery like we experience on Earth. But these scenes intrigue me. Seeing the first humans embark on settling the forbidden terrain is inspiring to a degree, but getting this started wasn’t quite so easy.

The Deimos Virus wasn’t so much difficult to write as it became convenient to place on the back burner while I wrote other novels. Often, I’ve had three strong novel ideas pressing on my mind at the same time. I’ll work on each during the day, but ultimately, within a few days, I realize I cannot effectively write all three works at the same time. Of the three, one usually surfaces as the story with the most urgency. The characters demand full attention to their dilemmas and the storyline has gripped me to pursue them to the end to see who survives. For some reason, The Deimos Virus got pushed back… a lot.

How did the idea for The Deimos Virus evolve?

In 1984, while my sister, Gina, and I were visiting our father for a week, he took me to the Exxon he managed during his shift. In between customers and his paperwork, we could talk about different things, and I met several of his employees. One of his employees mentioned a sci-fi idea to me when my father told him I was writing a novel. His idea intrigued me.

“What if,” he said (the best query method writers utilize), “the government invented a computer chip to implant in our brains, which controlled our thought processes to the point we were forced to work sixteen hours but only believed we’d worked eight?” Thus, the employer got eight hours of free labor the worker doesn’t know about. The concept stuck with me, but my version is far different, and my original title with a weaker plot was “I Dream of Sleep“.

I wrote a short story for this almost ten years after talking with him, but it needed more plausibility. It wasn’t set on Mars, either. All I had was a seed for a novel, which needed planted, fertilized, and plenty of time to mature and branch out.

In 1999, my wife and I purchased our first house in Fort Payne, Alabama. In the storage building behind the house, I found a stack of 1980s Omni magazines and other science magazines the previous owner abandoned. Some of these books dealt with the ambitious goals of colonizing Mars and other planets and how we could achieve this. For some reason, my imagination went wild and incorporated the ‘Dream Chip’ as I previously termed it into a ‘space colonization on Mars’ novel. I changed the name to ‘Sleeper Chip’ and these essentially were used on the Martian miners to control them, as they’re ruthless prisoners from Earth tricked into believing their prison sentences will be expunged after mining for so many years. These chips are controlled by an electronic device, CAM-L. So they mine, eat, and sleep, but have no knowledge of their actions at all.

Why is The Deimos Virus the fifth book in the Predators of Darkness Series?

Although this book is a part of the series, it IS a stand alone novel. You don’t need to read the previous four books to understand the story; although it doesn’t hurt to gain more background information with book three. 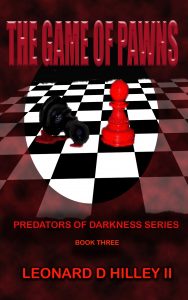 This book is in the series due to two of the characters introduced in The Game of Pawns (Book Three of the series). Boyd Grayson is a multibillionaire who works with genetics and scientific technology. With his vast fortune, he has begun his Mars project and settled an encampment in Olympus Mons. He’s far ahead of any other space exploration teams and for his investments, he’s reaping greater financial gains due to the discovery of a rare gem only found on Mars, the MarQuebes.

Grayson hires a genius early on, Steven Matthews, who becomes his nemesis. Both men are narcissists who loathe one another and their mental devious games are to outwit the other and take the prominent high seat (at least, to their thinking). The battle of scientific wits is gauged in The Game of Pawns. These two set the center stage for what occurs in The Deimos Virus.

The opening, however, introduces us to Dr. Frank Carter, who is the M.D. on the Deimos Moon Station where he contracts an alien virus and watches most all of the inhabitants succumb to the disease. Their deaths spark his resentment for Grayson on Earth and his need for vengeance. He’s the opening catalyst that sets the story into action. His dilemma is getting back to Earth to exact his revenge. To do so, he teams with two prisoners to steal a shuttle to return to Earth.

Carter’s introduction and dilemma wasn’t something I preplanned. He was a product of one of those days when I’m staring at a blank page and allowing my mind to drift, typing in a free-flow. Bit by bit, the opening chapter emerged. But this was years before The Game of Pawns was written, so the opening for The Deimos Virus evolved more so after finishing the third book in the series.

What’s after The Deimos Virus?

For the past two weeks, I did a thorough revision process for the novel and the characters evolved as well. I also went back to the original ending for the story, which leaves the possibility for several branch off novels, based on the characters in the book. I cannot divulge more information, as doing so would be considered major spoilers for those who’ve yet to read the novel. All I can say at this point is I’m working on the sixth book in the Predators of Darkness Series.

The digital Kindle copy of The Deimos Virus is currently on sale at $2.99 (438 pages) for the next two weeks.