When I was six years old, our grandparents were visiting from Ohio. I always loved when they visited, as we seldom got to spend a lot of time with them.

Papaw said, “That shirt you’re wearing is a money shirt.”

I looked at the shirt with great curiosity. It was a plain green pullover T-shirt. Nothing fancy about it.

I shook my head.

“It has magical powers. Come here. Let me read the tag on the back.”

I walked to where he sat, and he turned me around and pulled up the tag. “Uh-huh. A money shirt.”

Something clanged on the floor. Several pennies rolled.

He shook his head. “No. Those came from your shirt.”

I scooped up the pennies, and he stood. Without me noticing, he started dropping coins through my shirt and directed me to grab them. More pennies, some nickels and dimes, and then a few quarters. Change was all over the floor. Grandpa wasn’t as good with misdirection as Penn & Teller, but he was quick enough that I never saw what he was doing. It wasn’t too difficult for him to keep the charade going since I was so excited about getting all the money off the floor.

Apparently, my father got jealous about what he was doing, so he joined in, too. Both of them sat on their knees on the hardwood floor dropping money while I wasn’t looking. Then a dollar bill fell.

My mind raced. I had another shirt designed like that one except it was red. I told them about it. “I bet it’s a money shirt, too,” I said. I ran to my bedroom and got the shirt from the closet. I eagerly presented it to him. 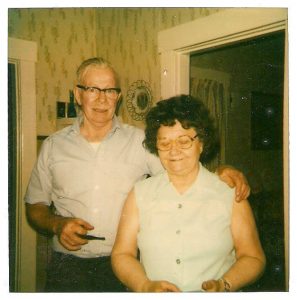 He and my father shook their heads. “Nope. I’m afraid it’s not one.”

I was disappointed. No more coins or dollar bills fell. I took all the money and put it in my bank and had to go to bed.

I never got to see my Grandma and Papaw as often as I’d liked, but fond memories of them have stuck with me all these years. Not a day passes that I don’t think of him, and he passed away in 1984. I truly hope my grandkids will remember all the games and experiences we’ve shared together later in their lives. Memories can be great treasures and time passes so quickly that we often don’t get to do all the things we planned to do.