Almost everyone knows about the movie, Toy Story. While I know the story is purely fiction told from the toys’ point of view, the movie has some emotional bearings for me. Not that the toys ever come to life–though when they somehow disappear, one wonders–but the memories these toys imprint upon our minds stay long after we’ve stopped playing.

From January of this year until early August, our daughter and our grandson lived with us. Our downstairs is a large open room where he kept all his toys and played. He never wanted to play alone, and whether it was me or someone else, he asked the same question constantly. “Will you play with me?”

Of course, each of us spent time playing, but at three years old, he didn’t want to play by himself. He often demanded for us to play, and we did as often as we could. He never fully understood that we had other things we needed to do. Even if you played two straight hours, he’d get mad when you stopped playing.

I enjoyed the time I spent with him, and we played games with Loc Blocs. As a kid, we never were able to afford Legos, so our parents had bought us Loc Blocs instead. One of the things we did to occupy our time had been building Jupitains from the blocks. We used our imagination a lot, and I wanted to pass this on to my grandson. I went to eBay and bought several big sets of Loc Blocs, as they are no longer sold in the United States.

So he and I built a lot of Jupitains, and surprisingly, he loved playing with them. Compared to little action hero characters he has, these Jupitains are rather bland, but he spent hours with me on different adventures.

He helped build dungeon terrain, and we set up dungeons with the Dwarven Forge dungeon sets I have. We set up various scenarios, but instead of using regular knights to explore the dungeons, he insisted we use our Jupitains, which had to fly from their planet and land outside of the dungeon. They had their little ray guns to use whenever they were confronted by monsters inside the dungeon. He never got tired of setting up different dungeon designs, either.

When we went to a craft store, he’d see something and say, “That would work good in our dungeon.”

About a month ago, our daughter got her first apartment in Kentucky, and we helped them move their stuff in. The apartment is too small for the number of toys our grandson has, so a lot of his toys were left behind in our basement.

For several weeks, I contemplated sorting through his toys and putting them away, but when I looked at them, I simply couldn’t. They were in the last arrangements that he had left them when he had last played. A part of me thought about the movie and how the toys were waiting for him to return and start new games. The memories of the games we had played still lingered, and day after day, I walked past them to get to my office, and the silence of him not there to play haunted me.

About a week after they had moved into their apartment, I chatted with my daughter on Facebook. She said that he had been feeling sad and upset. I figured most of it was due to being in a new place that was unfamiliar to him. So I took pictures of the Jupitains and uploaded them for him to see. Then I took a picture of one of the Fisher Price little people from when we had pretended an area had been flooded near the ocean. All the other little people were on a ship but this one was seated upon a toilet.

He laughed so hard that tears streaked his face and he had a difficult time breathing. Seeing him laugh like that tickled me, and we both burst out loud laughing. But then when he tried to sing the song, too, he’d get tickled again. I’ve seen him tickled before, but never like that. 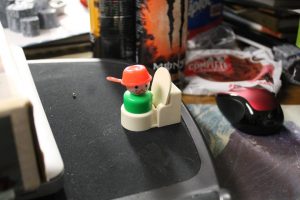 So these were the pictures I sent him. My daughter said that I had made his day. Fond memories are what I hope he always holds about the times we got to play games together. I miss him and his laughter and cannot wait until we get to spend more time playing games.

Today, I finally worked up the courage to sort through his toys and put them away. It was bittersweet and something I wanted to share with others. Spend time with your kids and grandkids. Play games with them. Even if it’s only a half hour a day, the memories last a lifetime.