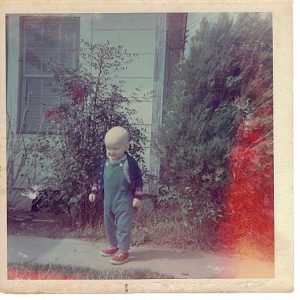 I was probably 2 1/2 years of age when this picture was taken. My parents rented this house for a few months before buying our home about a mile down the brow road near the Pleasant Hill Community.

Mrs. Davis (Armstrong) lived in this house after we moved. A small barn was behind the house with quite a few fenced-in acres. At the time, our father had wanted to start pig-farming as some of our relatives were doing this and earning a good bit of money. So with the owner’s permission, he bought a weened piglet and set up a trough near the fence. He wanted to get an idea of what was required in rearing pigs, so he started with one.

I don’t recall doing this, but my parents told me about how every day, I’d get some water in a bucket and stagger to the pigpen and pour the water through the fence into the trough. They said that I wasn’t able to tote much because the bucket was almost as big as I. Yet, I’d make trip after trip with water until I nearly filled the trough. I suppose I was dedicated to ensure it had water.

After a few months, the hog had grown large enough to send to the butcher. When they finished processing the hog, they called, and he went to pick up the meat. We would have had enough meat to last us a while, since it was only the three of us at the time.

My father brought home boxes of sausage, chops, tenderloin, and bacon, and set them on the table. My parents sorted through the packaged meat and then opened a large wrapped bundle, which horrified them. It was the head! They never realized that folks make souse and other types of ‘jellies’ from the head meat and fat.

That’s when they said that they had to give the meat away. Had the packers not included the head with everything else, they said that they probably wouldn’t have had a problem. But when they saw the head, all they could think of was how many times I had taken water and feed to the pig as it had grown up. They might have even named it. I’m not sure.

But that ended Hilley’s Hog Farm before it ever got started.