Skip to content
Home »Aetheaon»The Hardships and Discoveries in Moving

If I detest anything with a passion, moving has to be at the top of the list.

It’s hard to comprehend how we accumulate so much stuff during our lives. Over the years, we’ve thrown away dumpsters full of stuff, and yet, it seemed only a small portion. No matter where we’ve lived, most of our belongings (books primarily) have been stored in boxes. We’ve never lived in a house big enough to accommodate our possessions without a vast majority of it remaining in boxes, until now.

I have learned that the older I become, the worse the toll my body suffers in carrying/loading/unpacking heavy boxes, especially my lower back and knees. I ached for three weeks after moving this time and the thought of ever moving again sickens me. And stairs … Someone point me to the elevator.

The beauty of this move, however, is that unless some bizarre ordeal takes place, this is the house we shall call our permanent home. No more moving. That short statement is satisfying in so many ways.

In unpacking boxes, we are discovering items that we had even forgotten we had. Most have not seen daylight since we moved from Alabama to Kentucky in 2007 because we moved into a much smaller house for almost nine years. Boxes of our knickknacks and collectibles were boxed in the attic above us. Finding these now is almost as glorious as an archaeologist digging up treasure.

Sadly, some things don’t survive moving–even a short distance one. 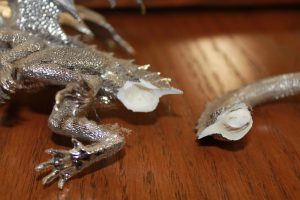 This dragon was boxed and moved from our last residence. The ‘real’ discovery here is that this dragon was supposed to be solid pewter and has plaster inside. This was sold back in the early 90s from a company that had an ad in the back of ‘Parade’ magazine in the Sunday newspaper. If memory serves me, the price was over one hundred forty dollars. Nothing super glue couldn’t fix for the cosmetic effect, but fool’s gold when one considers the false advertisement used to entice a dragon collector.

Among other items I had forgotten about were a collection of frog figurines I had slowly built during the time I was preparing to write ‘Devils Den’ where Justin McKnight is magically transformed into a frog humanoid in the Underworld (Aetheaon).

I knew I had the collection, but I had forgotten how many I had. Why frogs and why the transformation of a boy into a froglike creature? The reasoning is a blog for another day.

My new office is slowly transforming in its progression, too, but still a year or so from ever being completed, as I have plans to build bookcases along the perimeter and get more of our books out of boxes.

Ideas are emerging for new books, which have been placed on the back burner for a couple of months as I spent most of the summer packing and moving everything from the upstairs of the rental house in Marietta, Ohio, before the house collapsed. Whether we had decided to move or not, the house was going to move on its own. The foundation was in shambles. As promised, I shall upload pictures soon of that frightening ordeal.