When I was about nine-years-old, my parents sat and played Canasta for hours on the weekends. 8-Tracks of Don Williams or Jim Croce played continually in the background and my mother and father smoked lots of cigarettes and drank coffee while they played game after game.

I sat and watched them play, often asking what the rules were and how they kept score. I asked if I could play and for months the answer was always, “No.” Disappointed, I continued to watch and studied the game.

Finally the day came when my father asked if I’d like to play canasta with them. I was excited. I knew the rules, and now was my chance to play the game.

For the first deal my luck was better than I had expected. I had good cards, several wild cards, and after several rounds of discarding, I drew two cards that I needed. I set down several small melds and one meld of seven cards for a canasta. I had only one card left and had to discard. 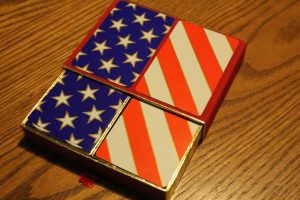 father stared at my cards in shock. In anger, my father threw all his cards onto the table and stormed out, saying, “That’s not the way we play it!”

I was confused. I had broken no rules, and my father was furious. He definitely was not a good sport, and for several minutes I considered leaving the table and quitting. Neither of them had placed any cards onto the table, but they both had enough cards to have melded a canasta and gotten points. Their hands were full of cards, but I had not broken any rules. However, I had set them in the hole. My mother counted off their losses and wrote down our scores. She whispered, “Your dad likes to wait until the last draw before laying down cards.”

I thought, “Why? What’s the point in that?” The game has rules but nowhere does it state one must wait until everyone else plays out their cards.

Ten minutes probably passed before he returned to the table, but his anger didn’t lessen. The funny thing is that he never held all his cards until the end of the game again.

The decks we used were like the ones in the picture. They had been released in 1976 for the Bicentennial celebration, and those have always been my favorite decks to play cards with. I have looked on eBay for years to find another set, and strangely enough, just recently, I found four sets of them. I had to buy them for the nostalgia because I really never thought I’d see another set after all these years.