I’ve made a few posts about the turtles in our yard over the past two summers. While mowing, I’ve had to be extra careful to watch for them because I don’t want to run over one with the mower.

Three adult turtles patrol our yard on a regular basis, but this year I happened upon a surprise while mowing. During the last time I mowed, I came upon these three little fellows–one shy of the Ninja type of turtles. 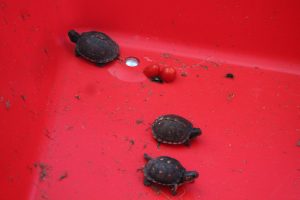 I found each of them in different sections of our backyard. It’s a miracle they weren’t hit by the mower blades, as I didn’t expect any baby turtles. Soon after I took this picture, we released them in the woods far away from our house so that it was less likely they’d cross the path of my lawnmower in the future.

It was a wonderful surprise, but oddly, I’ve not seen the larger turtles since early spring. But since the mid to late summer months have been overly dry, I imagine they’re in the weedier areas near the woods.

It’s hard to believe the diversity of wildlife we have in and around our property and still live in the city. I have seen two toads on our porch this summer, which is a welcome surprise as well. Yesterday, I saw a variegated fritillary butterfly on our butterfly bush. I didn’t think their range went this far north. I plan to get some Passiflora vines planted next year.