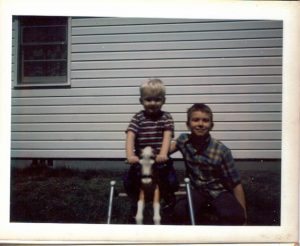 The old house we grew up in sets behind my oldest brother, Chris, and myself in this picture. It seems the older I get, the more my mind reflects back to the simpler times, when as a child I didn’t worry about the things in life I now face. The thought of growing old doesn’t bother me, but my memories of things gone by continue to jostle my mind. Perhaps it’s the blessing (sometimes a curse) of a writer’s mind.

From the time I was two years old, my mind has absorbed and contained things that even baffled my mother when she was still alive and we talked about events during the early times of my youth. I recall these events in perfect detail.

“How do you remember those things?” she asked. “You were so little.”

“I don’t know,” I replied. And yet, I do. I remember things she and my father probably wished I didn’t remember. I recall things I wish I didn’t, too, but those I’ve learned to accept and move on.

From the picture, I remember this old bouncy horse, not because it was fun, but because my leg had gotten pinched in those old springs one time when I wore shorts. It left a painful bruise and one that lasted a couple of weeks. I imagine this had happened to a lot of children back then, and perhaps it’s why they stopped making these types of horses many years ago.

I remember the summers when my two older brothers and sister came to visit. Those summers were some remarkable times. Things we did have stuck with me even now, and a lot of those things shaped me as a writer. We all loved ghost stories, scary tale comics, and investigating what we thought were great mysteries in the woods and pastures behind our house. The old woods behind the house was an actual spooky place, and my oldest brother can tell you tales of unusual circumstances that occurred when he had lived in our old shed as a teenager for a while.

Our father was one who loved to pull practical jokes, but I’ve seen times when even he showed fear about those woods. Once, my younger sister and I had set up a homemade tent in the side yard, so we could camp out for the night. Many times we attempted to do this, but not once did we retain the bravery to do so. One particular night after darkness had settled upon us, we were hiding in the tent too afraid to actually fall asleep. I told my sister that Dad would try his best to scare us so we’d run back inside. Sure enough, we heard footsteps in those woods not much later.

My sister was little, perhaps five years old or six, and against my warnings, she bravely headed to the edge of the woods where the footsteps crunched the underbrush and leaves because we thought our father was out there. I expected him to jump out and scream at any moment. A few seconds after she stood at the tree line, our father called from the back porch behind us.

“What are you doing?” he asked.

His voice caused us to jump. We turned and ran to the house beside him. We told him about the footsteps we had heard, and needless to say, we didn’t go back outside until the following morning. The stranger part is that our father didn’t go to see what had been walking along the edge of the woods. And even stranger was that our dogs never barked or pursued what was there.

If I chose to list the odd occurrences about the old house and those strange woods, it would easily comprise several volumes. Were there ghosts? Spirits? What was the strange, overly large creature that roamed the woods behind us and the swamp on the long dirt road behind our house? I kid you not. Something was there. What exactly remains a mystery.

It wasn’t just our family that had witnessed such odd events. A senior who rode on our school bus once got on with an unusual sense of dread in his eyes, which was totally out of character for him. He lived about two miles from our house on a different side road and less than a mile from the swamp.

Mrs. Wright, our bus driver, noticed he was shakened after he took his seat and asked what was wrong. He replied that he had driven his motorcycle the night before through the bend in the dirt road that cut through the swamp. Midway through the swamp he encountered a large white-furred creature that walked upright. It crossed the road before him and ran into the trees. He turned his motorcycle around and sped home.

She laughed at the story for several moments, as he was known to joke a lot, but when he didn’t laugh in return or let on that he was making it up, we all took him seriously. His fear of what he had described didn’t lessen, and when she drove the bus through the swampy section of the dirt road, he pointed to where he had spun the motorcycle around on the sandy dirt road to avoid whatever he had seen. Sure enough, deep tire marks were cut into the road. He never recanted his story, and not long after, he started driving to school.

Some years later, when I was collecting butterflies in that area, I noticed a huge claw mark freshly dug into the muddy side of the ditch and this mark was bigger than my size twelve shoes. On the bank above the mark was tall sage grass about waist high. I climbed up to the grass, and something big scampered away on all fours toward the trees. A bear? Doubtful, as none have been reported there. And if I thought it were a bear, I’d say so. Honestly, I have no idea what it was. All I know is it was large and as it ran toward the trees, I ran the opposite direction. Self-preservation at its best.

Our grandfather could tell stories of things he had seen, too, and I regret that I never really got to sit down to hear his tales before his death in 1984. But soon, I shall reveal more of those mysterious events that shaped and molded my imagination. For as a writer, I’ve always asked, “What if?” Sometimes, I wonder, “What was it?” I suppose these questions keep me writing, and a lot of these mysteries have helped with the writing of my Young Adult series, “Dee’s Mystery Solvers.” I’ve almost finished the second book in this series and hope to see them in print later this year. Read early unpublished chapters at my Patreon.