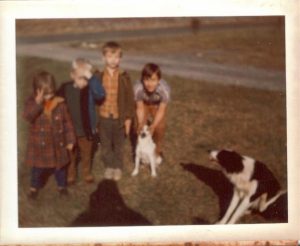 Back in the days of the Polaroid. We always argued over who got the flaming hot flashbulb when it popped out of the camera. The reward of ‘winning’ was an occasional blister, but the scuffling remained the same.

How things have changed since. As you can see, the sun was bright on this day. My sister, Tina, and I are shielding our eyes. David’s eyes are more closed than open. Dad’s shadow indicates who the photographer was, and I’m certain a better angle could’ve spared us the sunspots in our eyes.

If my guess is correct, this was probably taken during the winter of 1971. Ages ago. The yard was still partly barren, and our father’s tree-planting addiction had sprouted, but not yet come to (cough) fruition.

Chris, David, and Tina were visiting us near Christmas. Those were thrilling times for me whenever they came to visit. Summers, when they stayed for a few weeks, were always adventurous.

The dog Chris has his hands on was Ol’ Queenie, a beagle. The collie in front was Nell. One of Dad’s friends had given the dog to us. Nell was an interesting dog. She liked playing games with us, and we learned this by accident. My mother was throwing one of those plastic balls you find in Walmart’s huge bins at me. Nell ran in front of me and hit the ball up in the air with her nose. Instead of batting it away, she kept hitting it up in the air with her nose like she was playing volleyball. She wouldn’t let it hit the ground.

Everyone gathered and took turns tossing the ball to her. She then volleyed the ball back to each of us. She loved it. Perhaps, she loved it a little too much. By evening, her pointed nose had worn the ball out and the ball lost its air overnight.

She learned, and we did too, that baseball was NOT her game. Her eye/mouth coordination was perfect, as she did catch a popup with great accuracy but chipped a tooth in the process. She retired quickly from the sport, leaving the task of catching baseballs to us. However, she didn’t make it any easier for us since she still ran to catch the ball and sometimes tripped us up before she ducked out of the way.

Nell was a great dog during my youth, but sadly, she didn’t stay with us too long. She had a bad habit of chasing cars and one morning when I went out to wait for the school bus, she’d been hit and was dead in the ditch. That’s one thing I hated about living so close to the road. We didn’t have a fenced-in yard at that time and lost a lot of dogs and cats to traffic over the years.

One of the greatest things about today’s camera technology is not having to buy film or pay for development of the pictures (unless you choose to print them out). Back then, film was used sparingly based upon one’s budget, but I wish we had a lot more photos of our youth. Millions of captured moments from our childhood are inside the vault of my mind. These are treasures that cannot be printed as photos but the events can be written about to share with others. Memories of our youth become more valuable as we age. Cherish the memories.