In 2013, a dream of mine was achieved. I finally got to visit Salem, Massachusetts.

The driving adventure from Kentucky to Salem was an experience.

For those of you who watched the television series, Bewitched, you probably remember the episodes where they went back in time to the Witch Trials. Most of the seventh season of Bewitched was filmed in and the stories centered around Salem. Salem’s history intrigued me, even though I was about six years old, and I knew I would one day visit. 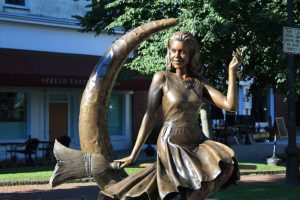 A lot of what Hollywood produces about the history of Salem is incorrect. No witches were burned in Salem. Hanging was how the accused were killed. Some were even pressed to death under stones.

Years later, those accused of being witches were found to be innocent. However, some were never absolved of the charges.

We visited several museums and learned a lot of Salem’s history. The accusations and the trials were really a power grab and politically motivated in order to take prominent land from the citizens. Basically, if you were accused and admitted your guilt, your land was taken and you lived. If you were accused and pled innocent, you were hanged and your land was taken. Either way, you lost your property.

Giles Corey and his wife were accused of being witches. Giles was a prosperous man who owned a great deal of property. He refused to admit his guilty, and rightly so. At the age of 53, he was sentenced to be pressed to death under stones. This torture required the subject to be stripped of clothing and boards placed upon the body. Heavy stones were added and the victim slowly suffocated to death. Giles Corey, according to some, was stubborn and greedy. Although in his defense, greedy isn’t an appropriate word when the man stood to lose all his property regardless of his plea. But for three days, more stones were placed atop the boards until finally he died. Before he died, Salem folks say that he placed a curse upon Salem with his dying breath.

Whether one believes in curses or not, Salem went from a prosperous port on the east coast to a shallow inlet. It was as though the bay dried up. Near Derby Square is a marker that shows how far the water had reached centuries ago. On Derby Square is 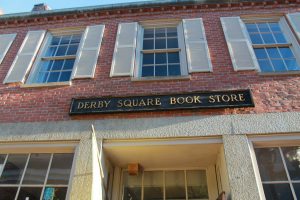 perhaps one of the most interesting bookstores we’ve had the pleasure of visiting.

From the outside, it’s not much different than any other storefront. But inside, that’s where the fun begins. If you love books, and if ever you get the opportunity to visit Salem, this is the bookstore of your dreams. 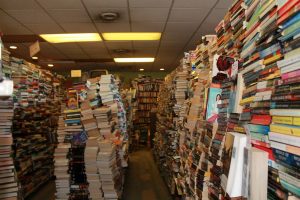 There’s no way to estimate how many books are stack from the floor to the ceiling, but the chance of an avalanche smothering you …

The picture to the right is the view from the door as you enter. We walked inside and a man said, “How are you?” Strange, I had not seen him due to the massive piles of books, but his voice was enough to give me pause. I stopped and took a few steps back to see a narrow opening on the counter between more stacks of books. As you can see from the picture, Frank allowed just enough room to pay him for the books. 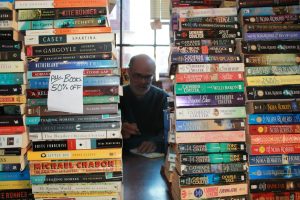 He told us that he could get us any book we pointed at, regardless of where it was in the stack. Of course it might require moving a hundred pounds of paperbacks to get it.

Anyway, approximately where this bookstore is located in the square was how far the bay once reached. And then in 1914, The Great Fire of Salem is recorded. Nearly 1400 buildings burned in the industrial fire, leaving thousands without homes and without jobs. According to legend, Giles Corey’s ghost was seen walking the graveyard the night before the Great Fire occurred.

We loved our trip and one day would love to spend several weeks there. I’ve more to share about Salem.