Thanks to everyone who has reached out with your prayers and well-wishes. That means the world to my wife and I.

She spent a second night in the hospital because she’s still having fever spikes and the CT revealed that she had a touch of pneumonia in one lung. With all the antibiotics they been giving her intravenously, the doctor believes the pneumonia will be knocked out, provided it’s bacterial pneumonia and not viral.

She’s had little sleep. Even days before she was admitted, she slept little for three days. She could never get comfortable. Her skin was so hot but our thermometer showed she had no fever. Now, I believe our thermometer was NOT working properly, as when she went to the ER, her temperature was close to 104. Her BP was high and her BP has always been on the lower end of the spectrum. 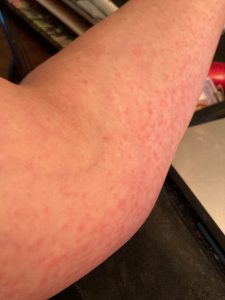 The picture shows her rash before she went to the ER. The rash has faded, but they still aren’t certain the reason for it. They’ve done a battery of blood tests and found nothing alarming. It’s now a matter of getting her BP and heart rate back to normal.

I brought her art pencils and pads to the hospital yesterday, but I was not allowed to see her or give them to her directly. I was told due to the current restrictions that they don’t want to chance someone passing Covid into or out of the hospital. This confuses me. They took the bag to her, which had to be carried by a person. The bag came from outside the hospital and was carried inside. There is NO logic to this.

While she was sick at home, I didn’t sleep in another room. I didn’t wrap myself up in sterile bubble wrap or wear a silver cross. We hugged. We kissed. And yet, I cannot see her now?

When someone’s sick, they need the comfort of their loved ones near them. Hopefully, she comes home today.

The hardest part for each of us is being isolated from one another. I’ve talked to her on the phone and her voice cracks sometimes, as does mine, as we each need to be together. I told the nurse and the person that took her art bag from me that the whole separation thing should be criminal. Isolation leads to depression, which lowers the immune system even more. The good thing is that she knows most of the staff and has friends there because it’s where she works. But what about the people who don’t and can’t have relatives and loved ones visit them?

She and I are soulmates. Somehow, we knew this before we met.

I don’t know that I’ve shared this in a blog or post before. It’s in my memoirs that I’m writing.

In December 1992, while we were both at Berea College, and before we ever spoke to one another, I was walking down the stairs to the lower dorm lobby and she was walking up. At the small square where the stairs turned to the left, I stepped aside so she could pass and head up. For several long seconds, we stopped and looked into each other’s eyes. I can’t explain the feeling but there was recognition for one another in our gaze. I read it in her eyes and she did in mine.

This wasn’t ‘love at first sight’. We saw and recognized that we fit and were meant to be together. Two months later, through a series of unusual circumstances, we were introduced and never left one another’s side. We’ve grown even closer through the years, had two wonderful children, and now are grandparents to two marvelous grandkids.

Being apart now, while she’s in the hospital, is a difficult ordeal for each of us.

Everywhere I look in our home has her touch and echoes her voice and laughter. Her absence reminds me of how much I love and need her. That loneliness is difficult.

Again, our friends and family, thank you for your prayers. She’s getting better and so we both hope she gets to come home today. Thanks for taking the time to remember her, us. You’re all fabulous!