Read for #FREE on #KindleUnlimited or purchase at a reduced set price. Both are also available on Audio (separately), too. 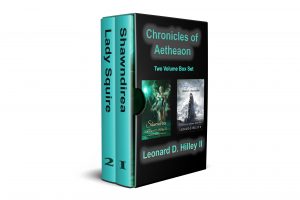 Often the smallest unexpected surprises garner the most demanding dilemmas, which proves to be the ordeal that entomologist Ben Whytten faces. While netting butterflies to add to his vast collection, he mistakenly sweeps what he thinks is the most spectacular butterfly he has ever seen into his net. Upon examining his catch, Ben is horrified to discover he has captured a faery and shredded her delicate wings into useless ribbons.

Once they cross the rift, Ben enters a world where mysteries, magic, betrayal, and power struggles await. He must adapt quickly or die because Aetheaon is filled with enchanted creatures and numerous races where chaos often dominates order. And since Shawndirea’s destined for the throne of Elvendale, opposing dark forces plot to prevent her from ever reaching her kingdom again. The faery’s magic isn’t enough to fully protect them, so he must trust other adventurers to aid them during their journey.

To what end would an exiled princess go to regain her rightful throne?

Lady Dawn, Hoffnung’s princess, brutally learns what it’s like to have everything unexpectedly stripped from her after Lord Waxxon’s coup kills her half-elf mother, Queen Taube, and he assumes the throne. Before Dawn’s plight, her mother’s bloodcurdling screams are etched into Dawn’s memory, giving her the resolve to somehow build an army, kill Lord Waxxon, and reclaim the throne. However, the odds of such an undertaking are far greater than a princess can overcome alone.

Unable to find Lady Dawn after scouring the castle and the kingdom, Lord Waxxon places a bounty on her, sending his ruthless henchmen across Aetheaon to locate and kill her. But Lady Dawn has disguised herself as a lowly squire, chosen by one of her late father’s Dragon Skull Knights, who doesn’t know her true identity. Alongside her knight, they seek other Dragon Skull Knights to gather forces to bring Waxxon’s reign to a quick end. Yet, her identity must remain secret, even to the knight she serves, until they have accumulated the necessary masses to storm Hoffnung.