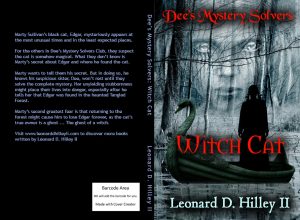 The paperback for ‘Witch Cat,’ the newest edition of Dee’s Mystery Solvers is scheduled for release next week.

“Marty Sullivan’s black cat, Edgar, mysteriously appears at the most unusual times and in the least expected places.

For the others in Dee’s Mystery Solvers Club, they suspect the cat is somehow magical. What they don’t know is Marty’s secret about Edgar and where he found the cat.

Marty wants to tell them his secret. But in doing so, he knows his suspicious sister, Dee, won’t rest until they solve the complete mystery. Her unyielding stubbornness might place their lives into danger, especially after he tells her that Edgar was found in the haunted Tangled Forest.

Marty’s second greatest fear is that returning to the forest might cause him to lose Edgar forever, as the cat’s true owner is a ghost … The ghost of a witch.”