Skip to content
Home »Alabama»Fishing: The One in a Million Cast

When I was a child, I often wanted to go fishing. Although I had begged my father numerous times to take me fishing, I can remember only two times that he did.

Once, he took my older brother, Chris, and I to Town Creek near Fyffe, Alabama. We had parked on the side of the road and walked through the trees to the creek bank beneath the bridge. The only fish we caught looked like a large goldfish, so looking back, it must have been a carp. I remember my brother reeling it to the bank and the fish flopping on the bank. Our father unhooked it and released it. The fish was bleeding as he put it back in the water, and shortly thereafter, we left.

The other time he took me fishing was with his friends, Johnny and Annette, to Will’s Creek in Will’s Valley near Collinsville. Whether I was fishing or not, I loved going to this creek. An old dam with what was left of a gristmill was a fun place to explore. But since we didn’t have fishing poles, Johnny allowed me to use one of his.

I wasn’t too good at casting, and I didn’t catch a fish that day. It was also the first time that I had seen someone use sweet corn as bait. After we had fished for less than a half hour, the fishing line in the reel I was using knotted up and wouldn’t cast. I took the pole to my father, but since he never fished, he had no idea how to fix it. Embarrassed, he told me that I had torn up the rod and reel, but Johnny came over and grinned.

A few years later, after my parents divorced, I still had the urge to fish and wanted to learn as much about it as possible. I mowed lawns during the spring and summer months to earn money. I picked up aluminum cans as another means to get money. After I earned enough, I decided to buy my first rod and reel. 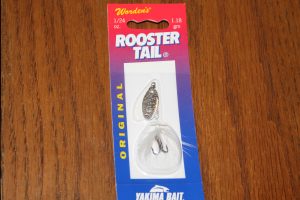 My mother took me to Kmart, and I bought a Zebco 404. I bought some bobbers and didn’t know much about the type of hooks I needed, so I bought a Lakewood lure. This lure had a treble hook covered with feathers and a spinning blade near the top, which is called a ‘rooster tail’ by fishermen. Not knowing the purpose for the hook or how to use it properly, I attached a bobber and placed grasshoppers on the three hooks. I caught panfish like crazy.

Boykin Farms had a good sized pond in the pasture behind our house. I fished there, and the great thing during the summer was not having to worry about bait. Grasshoppers and crickets were everywhere.

One day, my friend, Jerry, came to the pond with me to fish. He brought his fishing pole, and when he saw my lure, he said, “You don’t need a bobber for that. Just cast it out and reel it in.”

My first thought was ‘that will never work.’ So, I continued placing grasshoppers on it and used the bobber.

Before he left to go home, he reeled in a largemouth bass. Up until this point, I had only caught bream. This was the first bass I had ever seen, and he told me that if I quit using the bobber with my lure, I should catch a lot of bass, as the lure was made specifically for that purpose. Since he needed to get home, we took our stringer of fish back to the house.

The next day I returned to the pond and caught several bream, still using my poor technique. The sky darkened and storm clouds formed. Thunder rumbled. I didn’t have long to fish and needed to get away from the pond before the lightning was closer. Before leaving, I decided to follow Jerry’s advice. I took the bobber off the line and cast the lure out. Almost immediately, a fish yanked the lure and pulled away.

I cannot explain the excitement of the strike and the struggle to reel in this fish. It zigzagged back and forth, pulling away as hard as possible. I somehow managed to reel the fish onto the edge of the bank. It was a two pound bass. I was hooked (pardon the pun) from using the lure in the way it was meant to be used.

I reached down to unhook my first bass and discovered a problem. The fish, although small, had put up a greater fight than I had imagined. Two of the three hooks had been snapped off, and the remaining hook was barely attached to the inside of its mouth. The body of the lure was bent and destroyed. How I got the fish to the bank remains a mystery, but I placed it on the stringer and hurried home before the storm got worse.

My mother took me to Kmart so I could buy another lure, but for some reason, Kmart no longer carried the Lakewood lures. I found others that were considered the ‘true’ Rooster Tail lures, so I bought a couple of those.

Catching bass was becoming easier, and an old man (Denson) who worked on cars and lawnmowers about a quarter of a mile from the house gave me several old Field & Stream magazines. My knowledge for catching bass and other fish was increasing.

Some months later, I told one of my friends, Tony, on the school bus that I was going to the pond to fish after I got home. He told me that he’d get his pole and meet me at the pond, but he lived about two miles away.

I got to the pond and was trying to catch a few fish before he arrived. The best place I had found to fish was near the drainage pipe on the deep end of the pond. I made several casts and one unfortunate cast. My lure snagged the rusted pipe. I attempted to pull the lure free but instead, the knot on the eye of the lure unraveled. I replaced the lure with another rooster tail and kept casting.

Again, I cast too close to the pipe and snagged. This was my last lure, and I didn’t want to lose it, too. So I tried something that had worked for me before, and that was releasing the line and backing up as far as possible and pulling at the hook from a different angle. Sometimes, this freed the hook.

I had unraveled a lot of the fishing line and was pulling the line over the top of the cattails when something totally unexpected happened. The end of the fishing line in the reel had never been tied at the factory and the line slipped off my fishing pole and fell atop the water. Within seconds the line sank, along with my heart.

About this time, Tony climbed over the pasture fence and waved. A few minutes later he met me on the dam of the pond. I told him how I had lost my line in the water, so he cast his line across where mine should have sank. After several casts, his hook caught my line and he reeled it in. He handed me the fishing line. I took a small piece of driftwood, wrapped the line around it, and slowly began backing up until the line tightened. I pulled slowly but not hard as I feared the line might break like it had the first time. The tension on the line slacked, and I figured that I had lost the second lure.

I kept wrapping the line around the piece of wood until the end of the line revealed that I had not lost my lure, but instead, I had caught the other lure I had lost on the rusted pipe. One of the treble hooks had went perfectly through the eye hole of the other lure! Instead of losing both, I had retrieved the first one with what has to be ‘A Cast in a Million.’ Perhaps a Trillion? Who knows? But I could never repeat the feat in a dozen lifetimes.