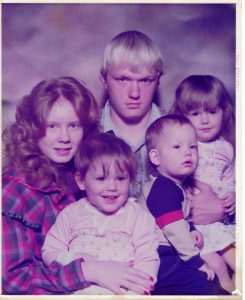 With time, things change. Goals, dreams, relationships, and reality all change. What we picture early in life and the success we hope to achieve isn’t quite the way we imagined.

Life is hard and sometimes cruel. But, in the end, it’s still what we make it. Wallowing in self-pity because things didn’t turn out the way we thought they should … Well, such an action doesn’t change the situation. It certainly doesn’t push us ahead. Instead, we get mired down in that miserable place, stuck in the past, and unable to continue our journey.

Writing has been my coping mechanism for over thirty years. The writing process has allowed me to analyze situations in my life and adapt. Writing has taken me into new worlds, introduced me to new characters, and through it all, I’ve been shown parts of me that I was never aware of.

Parents should be our examples in life, but sometimes they’re not the best examples at all. Both of my parents were alcoholics and pathological liars. I chose a different path. How? I’m not entirely sure. The qualities they exemplified were things I didn’t want to be, things I hated, and somehow my mind understood that. I had horrible parents, but I’ve tried to be a better example to my children. I think I’ve achieved that, but I don’t consider myself a perfect parent. Hindsight and all.

The picture above was taken about a year before I left for my Freshman year of college at Berea. The hardest part of leaving home for college was leaving my little brother and sisters. My twin sisters are fifteen years younger than me, and my little brother was sixteen years younger. The age difference made them seem more like my children than sisters and a brother. I sorely missed them when I went to Berea and that ache was part of why I dropped out at the end of my Freshman year. But looking back, I realize there were more reasons for why I hadn’t continued my education at the time.

I had no self-esteem. Others believed in me, but I did not. My high school teachers and my guidance counselor kept telling me how bright my future was and that I would excel. I didn’t see it. I couldn’t see it at the time. Self-doubt overshadowed me, mixed with my anger and resentment toward my father’s absence and his lack of communication from the time he and my mother had divorced.

Understand, I never thought I was the reason for the divorce. I understood months before they separated that the divorce was inevitable. The festering problems between them was fueled by alcohol, and while they thought I was asleep, I listened to their arguments each night after my father came home from his job at Northeast State Community College. She was drunk, bitterly angry, and jealous because he had finished his college degree while she had not. No sooner than when he got home, her slurred rage staggered from her lips, trying to belittle him.

After he left our house and Alabama, our mother remarried and over the next few years, my sister and I were blessed with twin sisters and a little brother.

However, my mind remained occupied with my father’s absence and why he never took the time to call or write. I wondered why my sister and I weren’t important to him. Perhaps this is why I write. My mind has always tried to figure out why people act the way they do or I try to find understanding for their actions. I run countless scenarios through my mind but never fully come to complete reasoning because there’s no way I could truly know their actual intent.

During that time, if my sister and I saw our father, it was once or twice during a year. Letters were rare. After a time, my mental adjustments came to where I didn’t expect to ever see him again. Yet, I tried to laugh and find humorous things to lessen the pain inside, but looking at this picture, I see the emptiness and anger in my eyes and the obvious lack of a smile. My expression reveals the loss and uncertainty my teenage self was undergoing when this picture was taken. The loss is also evident in my sister’s eyes, and our father’s absence affected her differently than it had for me.

Regardless of what we say, our facial expressions often reveal the pain inside. I met a guy named Jerry Riddle while I worked as a temporary manager at a Chevron station in Valley Head, Alabama.

Immediately upon meeting, he said, “What are you so worried about?”

I tried to dodge and downplay the question, but my response didn’t dissuade him. He quickly pointed out how the burdens I carried inside were obvious on the surface for everyone to see. But one thing he said has stuck with me after all these years.

He said, “Let me ask you something. If you spent twenty-four hours a day, every day for a week, would the problem change based upon your worrying?”

“Then why waste your time and energy worrying? Invest your time in finding a solution. Change the situation or work on it. Give the problem to God. Worrying will only eat you up inside.”

Some months later, I was working at Western Auto in Fort Payne in the garage. A woman came in to have some minor repairs done to her car. She was an interesting person and the other mechanics feared her. I didn’t know why, except that in some ways they seemed to think she was a witch. She certainly dressed the part. I didn’t say anything to her, but after the others went to get parts for her car, she and I were alone. She had been studying me for a while and said, “Things are going to get better for you. This is only temporary, but things will get better. You’re in a lot of pain, but you will see brighter days.”

She went on telling me everything about my problems without me saying a word. It was odd because at the time I was having horrible problems in my marriage (a book could be written about this), and the things she told me almost made me believe she knew everything about those issues. However, again, my facial expressions and my posture were my culprits. She was good at reading people, and her conclusions were true based upon her observations.

But years passed before I came to the conclusion that only I could change my self-esteem, but before that revelation emerged, I suffered through a lot of hardships and a painful divorce. At the moment when I should have collapsed and simply given up, I fought back. I had been backed into a corner for most of my life. Never once had I decided to do what was best for me, but in 1991, I finally did.

I wanted to better my life. To achieve this, I needed to go back to college, so that was the choice that I made. And that decision changed my life. I found inspiration and love for life, slowly realizing my true goals, my reason for living, and the future was indeed as bright as my teachers and guidance counselor had assured me years before.

My road in life has had various bumpy patches–some that seemed endless at the time–but I kept pushing forward, and sometimes I had to dig a tunnel through a mountain that blocked my path.

Life is what you make it.