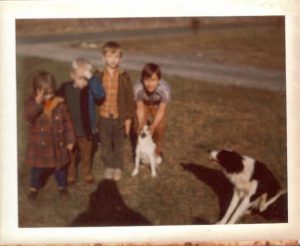 Ah, yes, the age of Polaroid pictures. This was taken around 1975 in DeKalb County, Alabama.
In the picture are my two older brothers and my older sister. Almost every summer, they came to visit, but this must have been when they visited around Christmas. I always looked forward to seeing them and have fond memories of the times we shared together. My two older brothers helped inspire my vivid imagination by telling scary ghost stories. We read spooky comic books at night before going to bed, explored the woods behind our house, and some mornings we got up before the sun rose to read them. My sister’s favorite comic was “The Witching Hour,” which became my favorite as well.
The collie was Neil. She was the most energetic dog we ever had. She played volleyball with us, and usually stole the ball and kept bouncing it off her nose, never letting it hit the ground. She tried playing baseball with us once, caught a high fly ball, and she learned that baseball wasn’t her sport. Neil was a beautiful dog but her one bad habit was chasing cars and sadly we lost her when I was in first grade. The other dog was our beagle, Queenie.
It’s amazing to look back at pictures of our youth when everything was filled with innocence. Often I pictured what I thought my life would become, and not once was I anywhere near to being right.