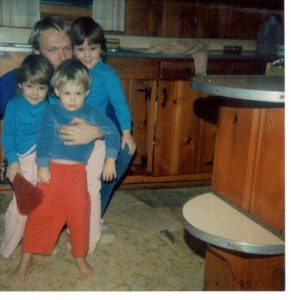 I was a college freshman at Berea College in 1985. One of the hardest things about being a student at Berea was moving two states away and leaving my twin sisters and little brother. I was fifteen years older than the twins and sixteen years older than my little brother. With the age differences, my sister Gina and I helped take care of them a lot, and sometimes, they were more like my children instead of siblings.

Only a few days after my enrollment at Berea, I found myself sorely missing them. I didn’t have any transportation to go and visit regularly. I did have the good fortune of getting to carpool at Thanksgiving and Christmas breaks with other students who lived in my home county.

Darryl Yates was a year ahead of myself and had graduated from Sylvania High School. He drove a Volkswagen Rabbit, which got great gas mileage and the price of gas at the time was $0.88/gallon. Jeff Cole, a friend that graduated from Plainview High School in ’85 with me, and Mike Morris, from Sylvania, were all bound for Alabama during Christmas Break.

The morning after finals surprised us. Several inches of snow covered the ground overnight, and when I looked out the dorm window to see this, I worried that our trip home would be delayed. Darryl shrugged it off and said that the Rabbit wouldn’t have any trouble. The Interstates would be clear. So we loaded up and headed south on I-75.

Right outside of London, Kentucky, I saw the billboard sign for the Dog Patch Trading Post. On our trips to Ohio to visit our grandparents when we were kids, our father always stopped. The store had various items that made good gifts, so I asked Darryl if he minded to stop there, so I could buy my family some presents for Christmas. He agreed, and we all went in. I bought several stuffed animals for my twin sisters and little brother, a cedar jewelry box for Gina, and something for my mother.

We probably spent a half hour in the store looking around, and when we were back on the road headed home, Darryl said, “I wish you’d have told me about that place earlier in the week. I already bought a lot of gifts, and I could’ve gotten better things there.” 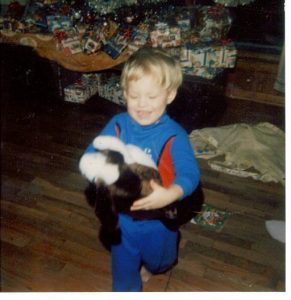 By the time we were near Knoxville, there was less snow, and none when we reached Alabama.

I hid the toys and gifts from everyone when I got home and had my mother wrap everyone’s gifts, except hers. Christmas was still more than a week away.

The twins and my little brother practically jumped on me when I entered the house. Their excitement made me realize that they missed me as much as I had missed them. They might have been small, but three against one still isn’t fair (as you can see in the picture). 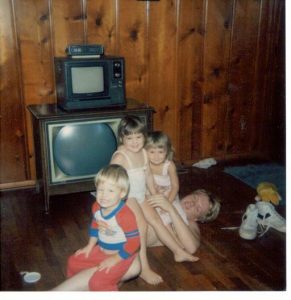 When Christmas break had ended, I had a harder time returning to Berea. I missed them more than ever. These memories are priceless, and I’m thankful to have the pictures reminding me of those days, in what seems so long ago.