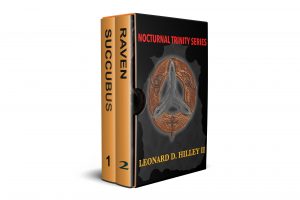 Nocturnal Trinity is the exclusive nightclub everyone in Seattle raves about, where the crème de la crème of the city mingles and parties. Access and membership are by rare invitation only. Those hopeful to become members are desperately willing to do almost anything to be chosen. They sacrifice hours of their time waiting in line, give blood offerings, pledge their very souls, and even kill, if doing so grants them a better chance for entry into the nightclub.

To the unknowing eye, the nightclub’s symbol above the door is merely occultic art, but to the ones able to translate its obvious message, the symbol screams a blatant declaration of the union of vampires, witches, and demons that preside over the club.

“Welcome to Nocturnal Trinity!” sounds like a cordial invitation for any new member fortunate enough to be chosen to partake in the Seattle Underground, but not so for Kailey Yates. She discovers something far more sinister resides inside the nightclub and their combined powers spellbind and blindly draw the lust of the city’s elite, mesmerizing them into doing whatever the nightclub’s Circle of Unity commands.

Kailey believed these creatures only existed in fantasy novels and movies, but now that she knows they are real, she must fight for her life because some of them want her dead. And one of those is the demon that murdered her brother.

***Read for FREE in Kindle Unlimited at Amazon.com or buy for $7.99. Two complete novels in one boxed set.