If you don’t have an Audible on Amazon, the one-month trial is FREE and includes 2 FREE audiobooks and 2 FREE Audible originals. $14.95 per month thereafter, but you can cancel at any time.

Do you enjoy listening to epic fantasy novels? Check out my first two novels (40 hrs. combined length) in the Aetheaon Chronicles Series: 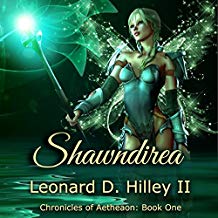 “Often the smallest unexpected surprises garner the most demanding dilemmas, which proves to be the ordeal that entomologist Ben Whytten faces. While netting butterflies to add to his vast collection, he mistakenly sweeps what he thinks is the most spectacular butterfly he has ever seen into his net. Upon examining his catch, Ben is horrified to discover he has captured a faery and shredded her delicate wings into useless ribbons.

Once they cross the rift, Ben enters a world where mysteries, magic, betrayal, and power struggles await. He must adapt quickly or die because Aetheaon is filled with enchanted creatures and numerous races where chaos often dominates order. And since Shawndirea’s destined for the throne of Elvendale, opposing dark forces plot to prevent her from ever reaching her kingdom again. The faery’s magic isn’t enough to fully protect them, so he must trust other adventurers to aid them during their journey.” 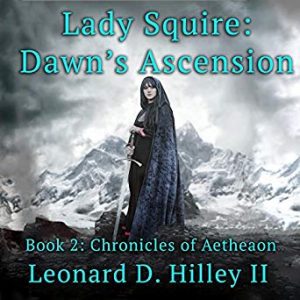 “How much degradation would an exiled princess of a fallen kingdom suffer in order to regain her rightful throne?

During a dark, foggy night, Vyking ships from the Isles of Welkstone slip into Hoffnung Bay to aid Lord Waxxon’s coup to take Hoffnung’s throne from half elf Queen Taube. As Lord Waxxon’s guards storm the castle, Queen Taube flees to Lady Dawn’s chambers to help her daughter escape.

After Hoffnung’s fall, Lady Dawn flees for her life in the hope of gathering together an army to overthrow Lord Waxxon, who killed her mother to take the throne. With Waxxon’s guards and hired assassins searching Aetheaon to find and kill her, she disguises herself as a peasant boy and takes the lowly role of a squire under one of her father’s former Dragon Skull Knights. But her identity must remain a secret even to the noble knight she serves, until he can join the other Dragon Skull Knights to bring Waxxon’s reign to an end.”